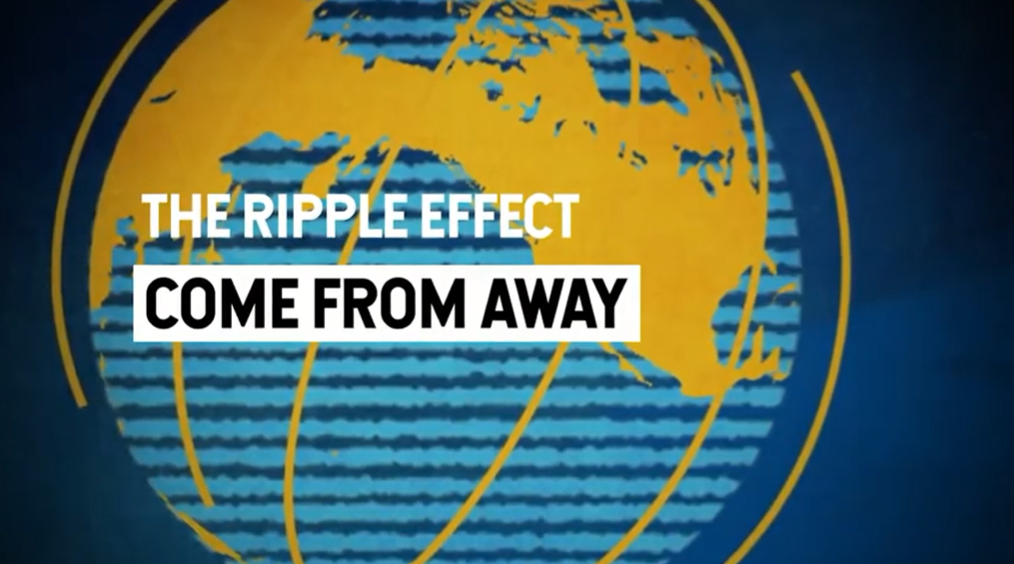 Every once in a while, a new work comes along that defines a moment in time so completely that it’s as if it’s always been part of our cultural consciousness.

Come From Away is that kind of show. It tells the true story of what happened when 38 planes carrying thousands of passengers found themselves stranded in the small town of Gander, Newfoundland, following the tragedy of 9/11. What emerges is a story of courage, compassion and kindness, amid a whirlwind of rollicking tunes and clever wordplay.

Come From Away has earned rave reviews and awards for productions across the globe, grossing millions of dollars and becoming the longest-running Canadian show on Broadway. It’s such a juggernaut that it’s almost as if it emerged fully formed. But its creators would be the first to tell you that it doesn’t work that way.

“There is a sense sometimes that there are genius people who create a thing just out of nowhere, and that it immediately goes all the way to the top. That doesn’t happen,” explains David Hein, who co-wrote Come From Away with his partner, Irene Sankoff. “We create these things within a community – and by being open to the fact that you need help to create something even more wonderful.” That help can come in multiple forms, and for Sankoff and Hein, it included public arts funding.

‘I remember getting those grants and feeling welcomed and encouraged’

The story of Come From Away’s development begins in 2011, when Sankoff and Hein received a grant from the Canada Council for the Arts to travel to Gander, Newfoundland, on the occasion of the 10th anniversary of 9/11. Their idea was to interview the townspeople who had welcomed the stranded passengers – or, in the local lingo, the “come-from-aways.” As Hein recalls, “It’s not far off-base to say that without the grant, we wouldn’t have been able to make that trip, and the show would not have happened. So, we owe all of this to the support that we got in the initial stages, because it allowed us to investigate this Canadian story.”

The next task was to take all these interviews and begin shaping a narrative. This is when the duo applied to the Ontario Arts Council (OAC) and were awarded two grants totalling $2,500 through the Theatre Creators Reserve program (now called Recommender Grants for Theatre Creators).

“When we received the Ontario Arts Council grant, we used that money to be able to actually have time to write the piece,” explains Sankoff. “Working on a day job from 8 to 6, and then coming home and having time and energy to write – it doesn’t always happen. And if we’re going hit deadlines, we need to be able to devote days to being able to write. Being able to actually focus on writing for full days was extremely important.”

The OAC’s theatre recommender program has a unique function – applications are read and assessed by Ontario theatre companies, helping them discover and build relationships with new theatre creators.

Hein remembers how important this was to him. “Not only was it a government grant to support arts, but it was a grant recommended by the arts community in Ontario,” he says. “We didn’t know a lot of people. And I remember getting those grants and feeling welcomed and encouraged. It just means the world when you’re starting out to have other professionals and other artists say, ‘You’re on the right track. Keep going.’”

Did you know? Both Statistics Canada and The Conference Board of Canada recognize creators (e.g. independent artists, writers and performers) and creative producers (e.g. theatre performances, concerts and publishers) as important first links in the “creative chain” or creative economy. Put simply, there would be no cultural industries without the work of artists.

From workshop to Broadway – and beyond

Then, in 2017, came the Broadway production of Come From Away… and it’s been consistently sold-out from the very beginning. In 2017, Come From Away was nominated for seven Tony Awards (ultimately winning for Best Direction of a Musical) and has now grossed nearly $175 million in New York alone. Since then, the show has toured across North America, debuted at the West End in London, and, most recently, opened to critical acclaim in Australia.

Sankoff and Hein are still amazed at how big the Come From Away phenomenon has become. “We’re constantly boggled just by the number of people who are working on the show in New York, in Toronto and around the world,” Hein remarks. In addition to the actors and musicians hired, each production includes set and costume makers, backstage technicians, ticket salespeople and other administrative staff.

And that’s just the direct employment generated by the show – Come From Away’s economic impact goes further than that. As Hein notes, “You know, there’s always the question of ‘what’s the benefit for investing in the arts?’ But you just look at the show running in Toronto to see the benefit to all of the local restaurants, to all the local stores and businesses, and it gives back to the community in spades – you know, like, multiples and multiples and multiples. Investing in the arts is a sound business decision. It’s a no-brainer why you should invest in the arts.”

Did you know? Arts and culture in Ontario directly contribute $26.8 billion annually to the provincial economy, representing 3.4% of Ontario’s GDP. There are more than 277,430 culture jobs in Ontario or 3.7% of total Ontario employment.

What’s next for Come From Away – and Canadian musical theatre

The next big thing for Come From Away is a filmed version of the Broadway production, premiering on Apple TV+ to coincide with the 20th anniversary of 9/11. There’s also a film adaptation in the works, which Sankoff and Hein hint will feature some new stories from Gander, too. The return to Broadway for the live production is scheduled for September 21, 2021, and they are looking to December 2021 for the return to Toronto’s stage.

After all that, what’s next for the duo? One thing they’re excited about is more ideas and innovation in the world of Canadian musical theatre.

“We grew up watching theatre and watching artists in Ontario,” explains Hein. “So, Come From Away not only comes from the support of artists, but it comes from the art that you grow up with, watching. And we stand on the shoulders of giants and a huge history in Ontario of arts support that has helped other artists create the art that then inspires people to create more.”

“And so, one of the things that I hope Come From Away can do is allow even more Canadian stories to be told, and new Canadian musicals, and new Canadian art to be inspired. That would be, you know, the least that we could possibly do.”