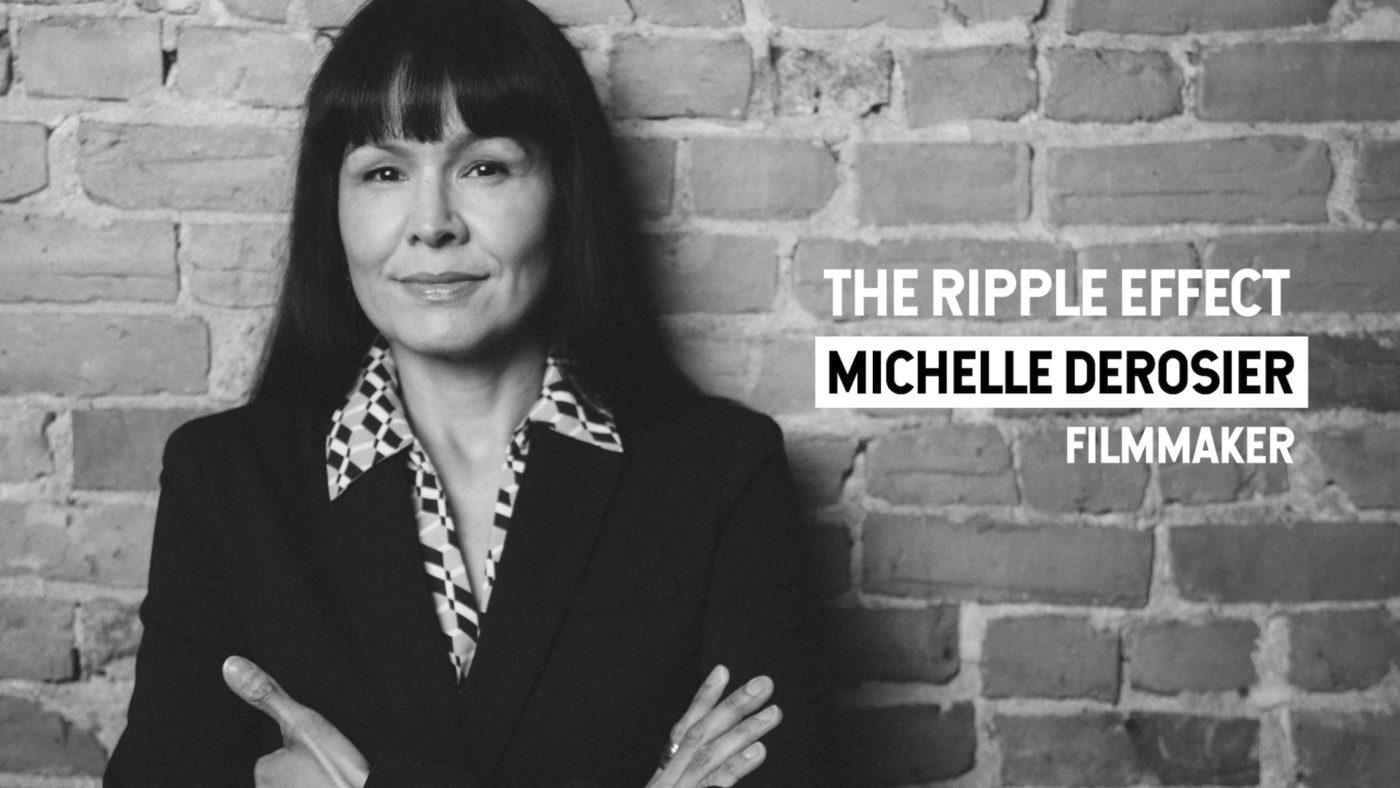 Whether consciously or subconsciously, we are all shaped by the stories that surround us. These personal and family narratives become a part of us as we grow. Then there are stories we absorb through the media – through books, music, television and movies. Often, this is how we learn about other people, and it influences how we perceive them and how we perceive ourselves.

Anishinaabe filmmaker and community activist Michelle Derosier has reflected deeply on the effects of representation. “Since its beginnings, cinema has played a big part in stereotyping Indigenous peoples and helping to hold us in a place that has not really been favourable to us,” she explains. “But now, we’re at a really important place where that has shifted in the direction where we are – or should be – front and centre of our stories.”

Derosier herself has worked hard towards this shift. All of her films – from documentaries to animated shorts to feature films – give Indigenous creators and communities agency in how they are represented, and how their stories are told. Along the way, public arts funding has helped Derosier in her mission to elevate Indigenous voices. “That’s what’s so important about the Ontario Arts Council,” Derosier says. “it’s a space where you can have your own voice. There’s a freedom in being able to tell whatever story that you need to tell at that particular time.”

Derosier began her career as a front-line social worker, with a particular focus on the needs of Indigenous youth. Through this work, she began to consider the possibilities of engaging young people through arts activities, including film. “You quickly realize that that sort of medium or a way of communicating allows Indigenous youth to communicate in a way that feels perhaps more gentle or safe,” she explains. “So, it started from there.” In 2008, Derosier was awarded a grant from the Ontario Arts Council (OAC) to lead an initiative called “Telling Our Stories” – a filmmaking workshop for urban Indigenous youth living in Thunder Bay who were deemed “at-risk.”

Around the same time, she wrote and co-produced her first film, Seeking Bimaadiziiwin – a drama starring four Anishinaabe youth with the goal to combat issues such as suicide, depression and racism. Within this project, Derosier saw another important story – that of the actors themselves. With another grant from OAC, she created a documentary about their experience called The Healing Lens.

The Healing Lens would be the first of many films directed by Derosier. All of her subsequent stories had an important element in common. “By being in community and being active in that community – that’s where those stories come from. That brings with it a huge social responsibility. And a responsibility to culture, and to generations, which is the biggest one for me.”

‘An acknowledgement that our stories matter, and that people want to hear them, and engage with them’

In 2011, Derosier began working on the script for her first feature film, Angelique’s Isle – a historical drama, based on the novel by James R. Stevens, inspired by the true story of Angelique Mott, an Anishinaabe woman who survived a brutal winter stranded on an island in Lake Superior. As Derosier recalls, “We’re dealing with murdered and missing Indigenous women and girls in this country for a long time, so my feeling was: to hear a story of a woman that survived against all odds was not a bad thing.”

Early support from OAC helped Derosier to begin writing Angelique’s Isle. “I had to have that initial script,” she says. “I could then share that to find a producer who believed in the story. And that started other balls rolling, like looking at other financing … the inaugural CBC Brick and Barriers Fund, Telefilm … so the Ontario Arts Council grant was really important for me to get that first foot in the door, with that story in hand.”

Along with leveraging additional support for the project, the funding provided a boost to Derosier’s confidence. “That writing grant played a significant part in the film reaching a theatre. What the arts council did for me at that time was that it believed in me. It was pretty transformative.” Derosier found that it was sometimes an uphill battle getting others to pay attention to Indigenous stories. “It took many years, and it took a lot of me talking to people and trying to convince people that this was a story that was worth telling. It was so important to get an acknowledgement that our stories matter, and that people want to hear them and engage with them.”

Among the people for whom the story has mattered most are Indigenous women. “When I first screened Angelique’s Isle in Thunder Bay, a young Indigenous woman posted on her social media page about watching the film, and how it made her feel – she had a real feeling of being an incredibly strong, beautiful Indigenous woman. And when I saw that, that night, I was, like, ‘That was – that was it.’”

Finding the best way to tell a story

Derosier not only seeks out stories that need telling – she carefully considers the most appropriate way for each story to be told. That’s how she came to direct The Grandfather Drum – an animated short that received OAC funding and made it all the way to the Sundance Festival.

“The idea began through conversations, with somebody that I was working with as a social worker at the time,” Derosier says. “He started to talk to me about this particular drum that comes from the north.” This was the drum of Naamowin, which was revered by the Anishinabek of the upper Berens River for its healing powers.

Derosier herself felt a connection to the story – as she noted, “My great-grandfather was a healer, much like the ‘character’ in the story. He was gifted with a Grandfather Drum to help others.” But Derosier’s great-grandfather was also of a generation that faced unimaginable losses – including having their children stolen and placed in the residential school system.

Derosier reflected on how she could share these interconnected stories with a larger audience. “I think that as creators and as filmmakers, that’s what we do – when you have a powerful story, then you have to figure out how you’re going to tell that story.” Derosier decided to use animation. The visual style of The Grandfather Drum came to emulate that of a children’s pop-up storybook, with subtle “paper-like” movements in the characters and surrounding imagery. As Derosier notes, these stylistic elements served as a counterpoint to the darkness in the story.

Creating an animated short was very different from Derosier’s earlier works. “We had a very small team of six people to make that film, which is kind of extraordinary, really,” she recalls. “I had to have a belief and a passion for that story – because the process can be very long, and it can be very daunting.”

But Derosier also had a unique way of inspiring her colleagues to keep going. “My way of motivating our team was to say, ‘You know The Grandfather Drum is going to Sundance, right?’ This was of course before I knew it, because we didn’t even have the film at that point.” Somehow, Derosier predicted what was to come. “I don’t know why I was saying that. It was the first time that I ever submitted to Sundance.”

The Grandfather Drum premiered at the 2016 Sundance Festival and earned positive reviews, including a notable mention from the Hollywood Reporter: “A more reverent look at elders and tradition comes in The Grandfather Drum, Canadian animator Michelle Derosier’s look at First Nations traditions being trampled by Christian evangelists. The short’s strong graphics and clever twists on a paper-cutout style enliven a sad, all-too-familiar narrative.”

But it was another part of the festival experience that truly resonated with Derosier. “The most impactful time at Sundance was when we had the opportunity to visit the local schools to share that film with younger audiences and engage young people in conversations. Because it was in the U.S., some of those audiences did not know the history, and they were hearing these stories for the first time. The curiosity and the awe of some of the young people was just really quite moving for me. It seemed like this was a way of storytelling that really connected to youth – not just Indigenous youth, but all youth.”

Did you know? 91% of Ontarians agree that the arts help us to understand other cultures better.

A future that gives more space to Indigenous stories

Derosier is continuing to share the stories of her history, family, and culture, in what she sees as small steps towards reclamation and renewal. “I think that we as Indigenous storytellers have a big part to play. We can just take the Truth and Reconciliation Commission, with the residential schools, as an example – or climate change challenges, or greed and corruption, or the disconnect from the land…. We need people to listen, hear and make space for the voices of Indigenous storytellers – to participate actively and engage meaningfully in these big, huge conversations we’re grappling with as a country. And I want to be part of that.”

The 2021 Hot Docs Festival saw the premiere of Spirit to Soar, a documentary produced by Derosier in collaboration with journalist Tanya Talaga. It is based on Talaga’s acclaimed 2017 book, Seven Fallen Feathers, about the tragedy of seven Indigenous high school students who died in Thunder Bay over the course of 11 years, focusing on the context of systemic racism and institutional failures. Talaga herself received an OAC grant towards completing Seven Fallen Feathers – and Derosier stresses the importance of public funding for all Indigenous storytellers.

“The Ontario Arts Council has played a big role for many Indigenous artists to help nurture our own beliefs, our own world views, our own philosophies,” she reflects. “What I have received from the OAC is not just financial support – of course, that’s a big part of it – but is being able to have the space to be able to do that. And I really do mean this, from the bottom of my heart.”