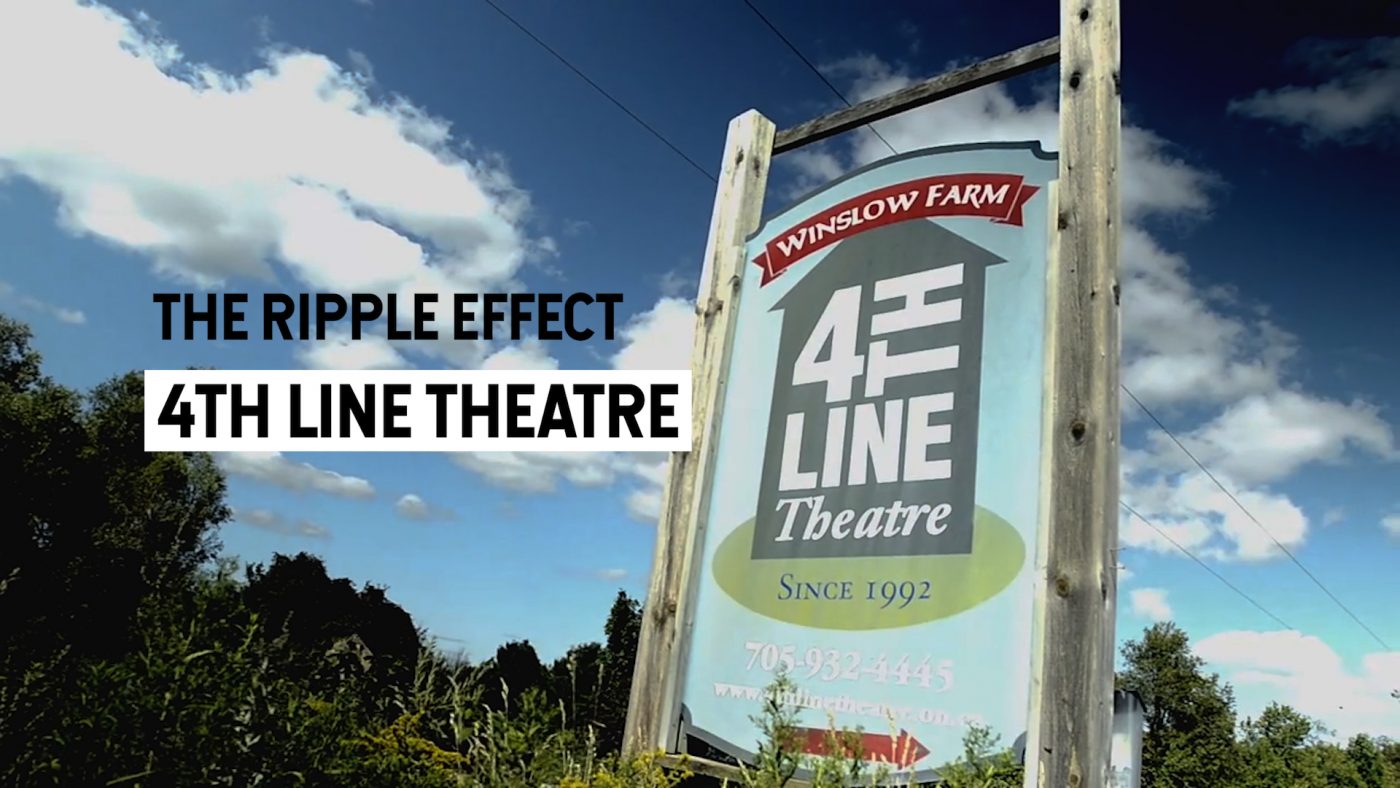 Can small towns have big stories? Absolutely! For almost three decades, 4th Line Theatre has celebrated the lives of rural Ontarians while bringing vital tourism dollars into the community.

The story of 4th Line Theatre begins in 1990, when playwright/actor/director Robert Winslow inherited his family’s 180-year-old farm in Millbrook, in the township of Cavan-Monaghan. Winslow cherished the property, but lacked the funds to set up a working farm. So, he came up with an unusual plan: as he explained in a 2011 interview with the Northumberland News, “In order to keep the farm, the idea I had was to start a theatre company.”

Winslow had already been working on a play set in 1800s-era Cavan-Monaghan, centred on historical conflicts between local Catholic and Protestant settlers. By turning the farm into a theatre venue, the play could not only be set locally, but staged locally – and this became 4th Line Theatre’s first production, Cavan Blazers.

“We had no idea if anybody would come,” recalls Kim Blackwell – then an assistant stage manager, and now the company’s managing artistic director. “We opened the first of what we thought were only going to be six performances.” But all six shows sold out, and 4th Line extended the run to six weeks. “From there,” says Blackwell, “We looked around and said, ‘I guess this is viable! We should think about telling other stories of this area.”

Capturing the hearts and minds of the local community

Three decades on, 4th Line Theatre continues to record and share the stories of generations of south-eastern Ontarians. As Blackwell notes, “Quite often, people will say to me, I can’t believe a little town like Millbrook has such a wealth of stories – I mean, we have 28 seasons worth of stories we’ve told. And I always say back to people: I think if you talk to anyone in a small town, you will find that every small town in this province has equally amazing people who have lived there and toiled there.”

What 4th Line realized early on was the importance of celebrating local people and lore. “As Canadians,” explains Blackwell, “We don’t celebrate our heroes the way some other countries do.”

Equally important is 4th Line’s recognition that their subjects are not merely characters, but cherished relatives and community members whose stories have often gone unheralded. “The art we do touches our audience in the most profound way,” says Blackwell. Quite often, there are people sitting in the audience and it’s their story, or their parents’ story, that we’re telling.

The story may be local, but the audiences don’t have to be

Of course, no theatre can make it to 28 seasons without an enthusiastic audience – and 4th Line’s legions of fans have transformed the community into a tourism destination. Every summer, upwards of 17,000 people visit the Millbrook-Cavan area, the vast majority coming – and then coming back again – for the 4th Line experience. “A lot of people from outside the region, after coming once, they become hooked, and make it a part of their summer ritual,” says Blackwell.

Did you know? Arts and culture tourists spend more and stay longer: the average Ontario arts/culture tourist spends twice as much per trip as a typical tourist ($667 per trip versus $374) and stays more than one night longer (4.4 nights in Ontario versus 3.1).

Tourism dollars extend well past the farm’s perimeter, and boost shopping, dining and hospitality. And it’s not just audience members who make an impact on the local economy – as Blackwell notes, “The community explodes in the summer [with] upwards of 100 actors, technicians, creators, volunteer actors.”

“An incredible thing right in their backyard”

Community members not only benefit economically from the show – often, they get to be part of the show. “[One] thing that’s unique about 4th Line is that we put professional actors on stage with community volunteers. And the community volunteers are not just extras – they have really substantial roles,” explains Blackwell. “We have volunteer actors who have been involved for decades every summer – it really does transform their lives.”

Even for locals who aren’t directly involved with 4th Line, the theatre is seen as a source of pride in the community. As Blackwell remarks, “I know that a lot of people, when they have visitors coming over the summer, they say, ‘We’ve gotta take you to 4th Line,’ this incredible thing right in their backyard.”

Why stable funding is essential

Funding from the Ontario Arts Council has been essential to 4th Line’s creative work and operations – which, in turn, generates ripple effects in Millbrook and beyond. Blackwell notes that multi-year operating funding has given 4th Line “a secure bedrock on which to grow,” adding, “Without the support of the Ontario Arts Council, I seriously doubt that the theatre would exist right now. And if it did, we would be limping along.”

“OAC operating funding has allowed us to have a stable organization that other companies look to. I know organizations that don’t have access to that level of funding, and who struggle with stability. What the OAC has given our organization, now into its third decade, is stability.”