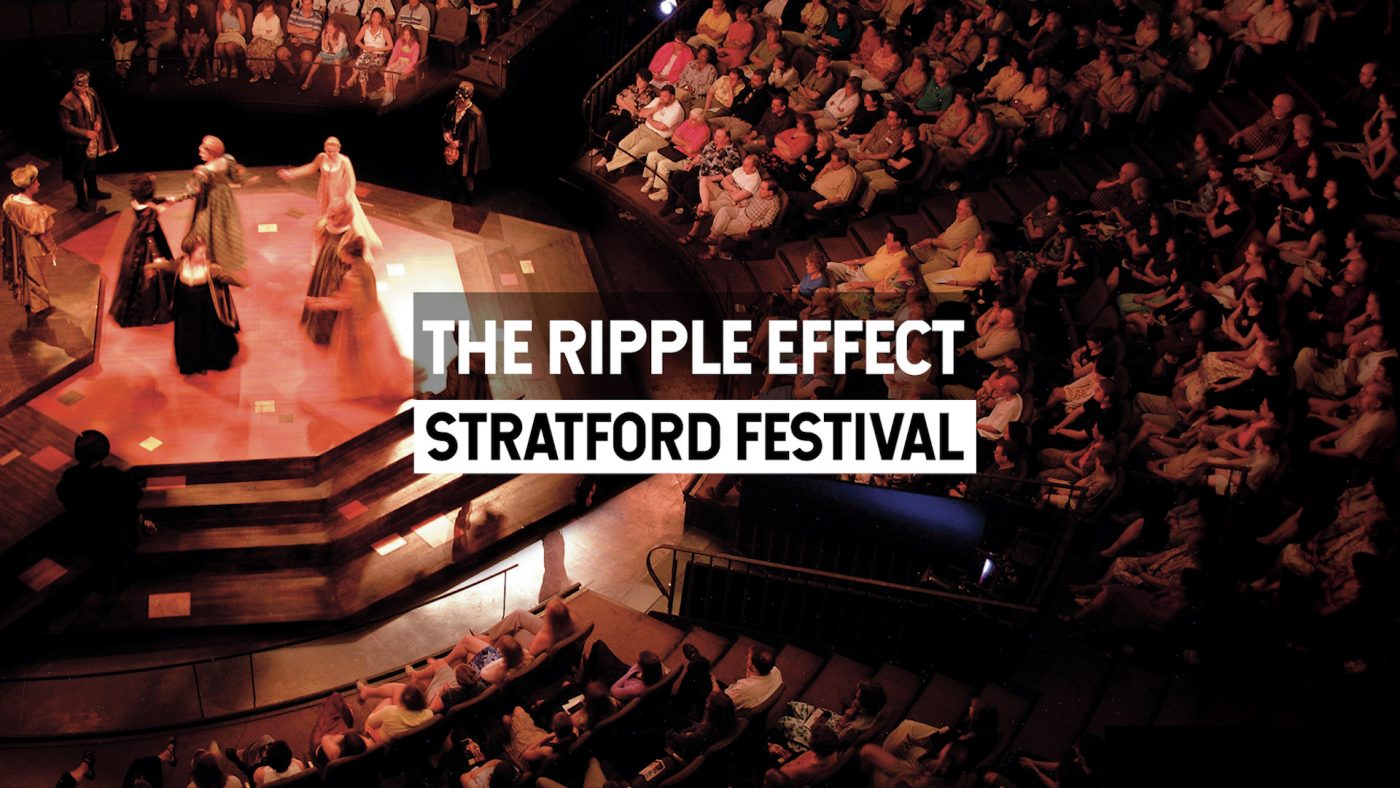 The year was 1951, and Toronto-based writer Tom Patterson couldn’t get his mind off his hometown. Patterson grew up in Stratford, a small town in southwestern Ontario built on two industries – locomotive repair and furniture manufacturing. By mid-century, both were on the decline, and so, too, were the town’s economic fortunes.

Looking for a way to turn things around, Patterson became inspired by its famous namesake – Stratford-upon-Avon, U.K., the birthplace of William Shakespeare. His intriguing idea: what if Ontario’s Stratford could also become a world centre for Shakespearean and classical theatre?

As the Stratford Festival’s executive director, Anita Gaffney, recounts, “It’s completely irrational – who would think that a Shakespeare festival would turn around the economic fortunes of a community? It raised many an eyebrow in 1953, but here we are 60-some years later … The community never looked back after that first season.”

The first season, in the summer of 1953, was a sign of what was to come. “It was originally going to be three weeks, and it was extended to six weeks,” notes Gaffney. “Amazingly, 60,000 people came. And the world paid attention to this little Shakespeare festival that could.”

The sheer number of attendees, and the fact that many came from abroad, were both novelties in Stratford. “There wasn’t a tourism industry in ’53, and that’s really grown up around the festival,” says Gaffney. “Now, we have fantastic hotels and B&Bs and small inns and really great restaurants.”

As a result, tourism is a now a key component of Stratford’s economic profile, and the city draws upwards of 1.7 million visitors each year. The Stratford Festival itself generates more than $140 million in economic activity for the surrounding community. It also supports over 3,000 jobs in the area – 1,000 directly with the festival, and 2,000 indirectly through tourism and hospitality activities.

Did you know? Arts and culture are a primary motivator of consumer travel among Ontario’s tourist market. 44% of North American tourists who visited Ontario among other trip destinations over a two-year period said that arts/culture was the main reason for at least one of their trips.

Among the Stratford Festival’s million-plus attendees are the 50,000 students who come each year. The festival works hard to ensure the experience is memorable for younger audience members. “We’ve invested a lot more in recent years in reaching out to schools and creating programming for them so that the kids are prepared for the show – and the teachers are prepared as well,” explains Gaffney.

Stratford also welcomes potential theatregoers who are more comfortable in an environment that isn’t as restrictive or intense as traditional theatres. Their relaxed performances are designed for people with intellectual or learning disabilities, sensory processing conditions or autism. These performances feature softer lighting, gentler sounds, and a more relaxed attitude to noise and movement within the auditorium. If this sounds familiar, it may be because you saw this adorable feature on the service dogs in training who attended a Stratford relaxed performance in 2019.

Today, Shakespeare remains at the core of the Stratford Festival’s programming, but other musical, non-Shakespearean, and Canadian works have been added to the mix. The festival also offers more than 150 audience engagement activities each year, often linking the theatrical to the topical. “These plays connect to what’s happening today,” affirms Gaffney. “For me, and I think many people, it’s much more concrete when you see how a situation impacts a person, and a relationship, and a life — which we can do through stories on a stage.”

And Stratford continues to build all kinds of connections. Recently, they’ve been partnering with the local digital media industry, which has expanded from nearby Kitchener-Waterloo to Stratford itself. Through these relationships, the festival has made strides in digital activation and innovative production design.

“An institution that is important to the province.”

But Gaffney is also quick to note that the festival is far from invulnerable. “People think from the outside, ‘Ah, it’s been around for 60 years, it’s never gonna go away.’ But we live on a very thin, break-even budget each year. Within a year, we have to make it all work – we have to sell the tickets, we need to raise the money. It’s a very challenging and delicate organization,” Gaffney says.

This is why public funding from the Ontario Arts Council (OAC) and other organizations remains essential to its ongoing operations. “Government support is a very important endorsement,” explains Gaffney. “It says to the people, this is an institution that is important to the province.”

And OAC plays a unique role for Stratford, in that it provides grants towards the creation of new works and artist development. “[OAC funding] has also allowed us to invest in the development of new plays, invest in the training of our artists,” Gaffney says.

“Over many years, we can look out across the country and see many artists that might have started their career here, and now they’re working on Broadway or working across the country, or they’re running theatres. The Ontario Arts Council has helped us to do that.”

All photos courtesy of the Stratford Festival.